Runic Wizard is a half-elf who was born among the noblemen of the Aristocrat's Arka and the elves of the wolf's altar.

I leave to the village of Iria, half-elf village, and live peacefully.

However, the Lemurian corps, who does not leave life in place by the rune wizard as an adult

I went through the  Irie village to defend the town,ï»¿

Villagers from the Arka and Fairy  fight with the Lemurian army, but they can not defeat the elite army. 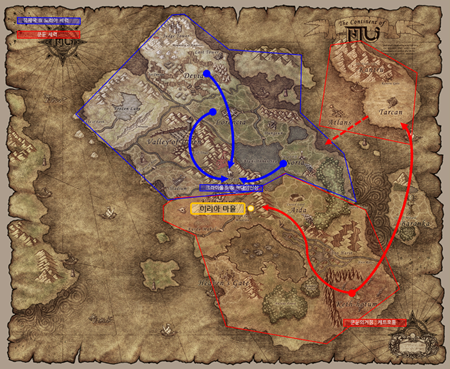 1) The rune wizard will start at Noria Village when first accessing.

2) You can nurture characters by hunting, tutorial quests, and guide quests in Noria Village.

- The resources of rune spells can be enhanced through character stats and items.

- Character's stats can be strengthened through level up and acquisition of stats points and items.

1) A magical offensive class that uses magic stats to attack and attack enemies.

2) At the same time, use two or more magic skills to attack enemies with high damage over a wide range.

1) The Runic Wizard character will form a set party with the Testimony and the Black Knight.

2) Second job - If you are finished first job and you are above 220 level, you can carry out second job.

- Qualify as a Hero

3) Third Job - If you are finished second job and you are above 380 level, you can proceed to 3rd job quest.

- Lv.400: Infiltration into the Bargain Barracks

1) There is a special skill that can be used only by the magic part of the Warlock and the rune wizard that was acquired through his father's research book.

- Rune Mace is a special weapon, and the other is wearing a shield.

- You can wear 5 armor items consisting of helmets, armor, pants, gloves and boots.

2) Other items - Pentagram and accessories

- Pentagram items can be worn the same as other classes.

- You can wear necklaces, rings, earrings and other accessories.

[ Absolute rune mace of the Archangel]

Vote to help the server!